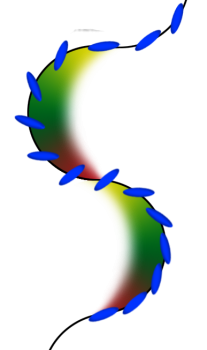 Phase of rise initiation is added to the usual phases of a carved turn. This phase includes actions of the rider aimed to gentle take off from the slope and to getting the basic position. Unfortunately most of the riders weren’t able to change their perception of carving and they believe mistakenly that it is necessary to rise from the laid-down turn using hands to push them from the slope.

In fact the main role is played by the position of the most massive part of our body – torso. You should learn to use the muscles of your abdominals and back to shift the centre mass slightly higher than the support and then inertia of its motion will lift you up itself.

In the very beginning of the turn when after edge changing the board still moves along the perpendicular of the slope you should make a deep inclination having your knees bent and to put your forearm on the slope near your leading foot. Then in the process of the turn you should straighten smoothly your legs, body and your forearm which is on the slope until the moment when your board crosses the fall line.

After crossing the fall line you need to initiate the take off from the slope by using the force of your abdominals and simultaneously you need to bend your knees sharply and your hips should be lifted first from the slope! At the moment of initiation and the rise itself  you should keep your shoulders in a ‘plus’ position in order to load the nose of the snowboard sufficiently. After the rise you need to finish your turn in ‘plus’ position and to get ready for the edge change. 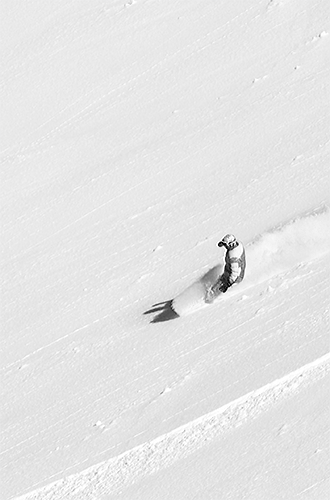