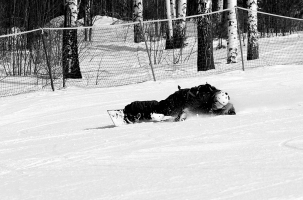 Funcarving is not a technique or a style of snowboarding

This is our attitude to what we do. This is joy and happiness which we gain by cutting the carves in the snow. But enjoying the fact that you are running down the slope is not yet funcarving, this is just fun.  The brightest feeling of pleasure you get only when you learn something new and managed to do something which seemed unreachable yesterday. By joining many people of various experiences and styles of riding under one flag here we share the secrets of mastery.

It happened so that most carvers buy plastic boots and stiff boards because they believe that the main reason for success lies in the equipment. But by doing so often they prevent themselves from the most important characteristic of snowboarding – its versatility! In fact you can carve successfully at high speeds on a usual snowboard and it will also allow you to have fun off-piste and to make tricks in the park. Everyone who has snowboard can learn carving because this is simply the next level of snowboarding after they learnt to make successive turns. And the price of a snowboard and its specifications will be of significance only at the final stages of carving – when learning laid-down turns.

We don’t divide people into ‘hardboot’ and ‘softboot’, we do not care which equipment you chose because the way to achieve success is the only one.

We erase the boundaries

There are a lot of styles in snowboard carving however we took as the basis optimal, beautiful and intuitively understood one – ExtremeCarving.

This style has absorbed the stability of sport styles and at the same time it remained beautiful and spectacular because the pursuit of seconds was rejected and hurried movements were replaced by smooth and free ones. Based on the Swiss technique and thanks to the experiments of Patrice Fivat and Jacques Rilliet extremecarving gained worldwide popularity in the ski community. Laid-down turns at extreme edgings captured minds of many snowboarders. However, it should be understood that these elements are the tip of the iceberg, and in the depths of the water there is the training base that has been accumulated and tested over the years. And only the gradual learning of each component of the technique will provide the result desired.
With support of www.ExtremeCarving.com